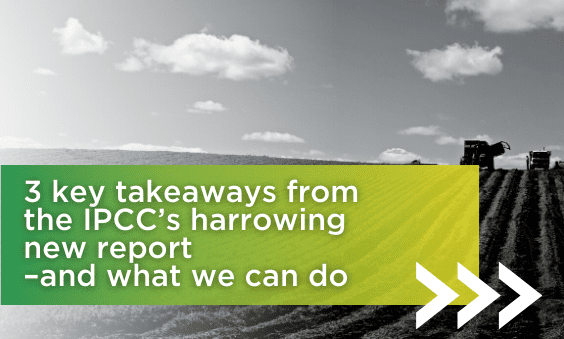 The report makes one thing crystal clear: World governments are not doing enough to mitigate climate threats, and the current acceleration of climate-related incidents leaves us with very little time to adapt. At this rate, the report asserts, approximately 50-75% of the global population could be exposed to periods of “life-threatening climatic conditions” due to extreme heat and humidity by 2100, and global governments “will miss a brief and rapidly closing window of opportunity to secure a liveable and sustainable future for all” if they fail to act in a transformative manner.

Here are some key takeaways from the report:

1. Climate change threatens our food system and is making it increasingly hard to grow food

This report and its predecessors have consistently shown that our food supply and security are at high risk due to climate change: As the report states, “climate change already affects all dimensions of food security, namely availability, access, utilization, and stability, by disrupting food production, quality, storage, transport, and retail. These effects exacerbate competition for land and water resources, leading to 40% increased deforestation, biodiversity reduction and loss of wetlands.” The increasingly volatile weather and temperature fluctuations not only make it more difficult to grow resilient and nutritious foods, but their dwindling availability also drives further damage to natural areas that are vital to mitigating climate change.

These impacts threaten the viability of a system already at extreme risk: Our global food systems are dominated by monocultures and low in biodiversity, which makes them more susceptible to drought, extreme weather, insects, and disease. Climate change also puts mounting pressure on global food production and access, especially in vulnerable regions that are at higher risk of food insecurity and lack of nutrition. Here in North America, warming temperatures limit the growth of commodity crops, wheat, corn, and soy and contribute to freshwater scarcity, putting a strain on irrigation and threatening water needed for livestock. On top of that, increases in carbon dioxide concentrations lowers the nutritional density of some crops.

Climate change may be putting our food system at risk, but our current food system is, unfortunately, a key driver of that risk: Food production accounts for 37% of global greenhouse gas emissions, and over 57% of that total is related to the production of animal foods. Runoff from industrial animal agriculture is a leading cause of ocean dead zones, and is also a key driver of deforestation and biodiversity loss across the world, as massive swaths of land and vital rainforests are cleared for cattle ranching or to grow livestock feed. According to the report, an area of rainforest the size of a football field is cleared every six seconds to make way for industrial soy, primarily for livestock feed, or beef production.

Unfortunately, governments are not only neglecting to act on these issues, but are often active drivers of them: A 2021 UN FAO report asserted that around 87% of the $540 billion that governments spend annually to subsidize food production contributes to harming nature, people, and the climate by promoting the overuse of synthetic fertilizers, agrochemicals, and monocultures. Further, the report says these subsidies are inefficient, distort food prices, are harmful to health and the environment, drive inequality, and put big agri-business interests ahead of smallholder farmers, many of whom are women.

Climate change-related natural disasters are becoming more frequent and impacting people of all socio-economic backgrounds; however, the report recognizes that the worst impacts of climate change are “strongly concentrated” among the poorest and most vulnerable populations–often those that contribute the least to climate change. Between 2010 and 2020, droughts, floods, and storms killed 15 times as many people in highly vulnerable countries, particularly in Africa — which is responsible for less than three percent of global emissions — than in the world’s wealthiest countries.

Even within individual countries, climate change deepens inequities and the IPCC report points to Indigenous peoples, small-scale food producers, and low-income households that rely directly on their ecosystems to meet basic needs as the most likely to be impacted by high rates of malnutrition–with children, elderly people, and pregnant women hit particularly hard.

There is some hope to be found in the report, however: It notes that there is much to be learned and applied from “diverse forms of knowledge,” particularly Indigenous and community-level practices that work in harmony with nature and effectively increase the resiliency of environments.

The report makes clear that we do not have time for top-down solutions that fail to recognize the history of land, native crops, and agroecological practices that work to foster biodiversity and resilience. “Lacking sufficient stakeholder participation, large-scale land acquisitions have had mostly negative implications for vulnerable groups and climate change adaptation,” the authors state. “Adaptation strategies that address power inequities lead to co-benefits in equity outcomes and resilience for vulnerable groups. Indigenous knowledge and local knowledge facilitate adaptation strategies for ecosystem provisioning, especially when combined with scientific knowledge using participatory and community-based approaches.”

Above all, the IPCC report issues an urgent call to action for countries and global governments to facilitate “transformative changes.” Incremental measures that seek to mitigate impact of climate events, such as weather-monitoring systems, biogas production, subsidies that promote destructive food production, and seal walls, are not going far enough. The only sustainable answer is a fundamental shift in how we relate to ecosystems and the role we play in them.

The good news is, there are a number of positive studies that demonstrate the powerful potential for change. Ecosystem-based approaches such as diversification, land restoration, agroecology, and agroforestry–all of which have roots in Indigenous practice–were highlighted as the gold standard. These tactics can pay serious environmental dividends: Studies show agroforestry stores 20-33% more soil carbon than conventional agriculture, and significantly lowers fire risk. Nature-based solutions such as forest conservation and ecological restoration that favors biodiversity can provide both “adaptation and mitigation benefits for climate change,” while also enhancing soil, conserving water, and lead to diversification in food production systems.

The Benefits of Systems Change

The IPCC’s report makes it clear that systems-based change offers an important lifeline for vulnerable populations and ecosystems across the world. And though our food system is a key factor in the current state of our climate, we believe that it also offers a unique opportunity to drive positive change. A recent study found that global greenhouse gas emissions from animal-based foods are nearly twice that of plant-based foods; shifting toward plant-based diets can not only play a role in curtailing emissions, but it can also re-allocate crops and arable land to feed people instead of livestock, alleviate growing resource inequities, and eliminate the suffering of animals in factory farms.

To do this, we pinpoint ways that the incredibly nimble and innovative plant-based foods industry–which we represent through our work at PBFA–can be a key agent of change. Chief among them is our Domestic Sourcing Initiative, which partners plant-based food companies with American farmers to build shorter, more stable, more sustainable supply networks. We are also launching efforts to work with major grocery retailers, foodservice operators, and distributors to help them meet ESG targets through the growth and development of their plant-based food portfolios. Importantly, we aim to build healthier, more sustainable, and more inclusive food environments that empower consumers. On Capitol Hill, we are working to ensure conversations about the necessity of a sustainable, equitable, and regenerative global food system are top of mind among policymakers.

A plant-based food system is not a far-off dream–it is already in motion. Despite the harrowing projections and unsettling statistics, there is reason for hope. Though it will certainly require tough decisions, hard work, and dedication, we are steadfast in our belief that by working to empower stakeholders at every level, we can build the food system current and future generations deserve.