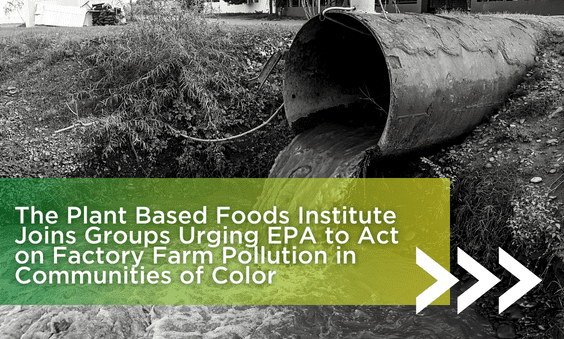 The Plant Based Foods Institute (The Institute) joined 200+ groups to send a letter to Administrator Michael Regan at the  U.S. Environmental Protection Agency (EPA), demanding that the EPA use its authority to hold concentrated animal feeding operations (CAFOs), also known as factory farms, responsible for the toxic pollution and damage caused to surrounding communities, many of which are disproportionately low-wealth, communities of color.

Both the Biden Administration and EPA have signaled their commitment to environmental justice and racial equity. In 2021, President Biden signed Executive Orders on Tackling the Climate Crisis at Home and Abroad and on Advancing Racial Equity and Support for Underserved Communities Through the Federal Government and the EPA released its 2022-2026 Strategic Plan, confirming its commitment to “follow the science, follow the law, and be transparent” and “advance justice and equity” as the basis for the Agency’s culture and approach to its operations and decision-making.

Despite these incredible strides, the EPA is still falling short of its responsibility to protect rural communities living near CAFOs. As the letter details:

“Odor plumes from CAFOs, which often pervade nearby communities, contain respiratory and eye irritants including hydrogen sulfide and ammonia. Both substances are associated with a variety of respiratory issues at certain levels, and studies have found consistent correlations between communities’ proximity to CAFOs and asthma, chronic obstructive pulmonary disease, and other serious health issues. One study published in 2021  found approximately 12,700 deaths per year from air pollution in the U.S. are attributable to industrial livestock production. That is more deaths than occur from pollution from coal plants, yet EPA has largely shielded  industrial livestock integrators and their web of CAFOs from oversight.”

Our current food system is designed to prioritize producing cheap animal-based foods and the pollution caused by CAFOs not only contributes to air and water pollution but also contributes to serious public health concerns like growing antibiotic resistance and the proliferation of toxic algae blooms and dead zones due to nutrient runoff.

Congress has granted the EPA authority to protect the public from harmful pollution and bedrock environmental protection laws such as the Clean Air Act, the Clean Water Act, and the  Emergency Planning and Community Right-to-Know Act, are already in place to enable the EPA to act. We join this coalition in urging the EPA to end the regulatory exceptionalism and hold accountable the industrial livestock agribusinesses profiting from the exploitation of environmental justice communities.

Getting to the root cause of rampant air and water pollution from factory farms requires a close examination of our food system that revolves around industrial animal agriculture. The Institute views driving transformation to a plant-based food system as the most impactful way to create a food system that is able to feed and sustain our population while fostering a resilient and healthy environment. Research shows that plant-based diets can not only play a role in curtailing emissions and minimizing water use, but can also aid in the re-allocation of crops and arable land to feed people instead of livestock, alleviate growing resource inequities, and eliminate the suffering of animals in factory farms. Shifting to a plant-based food system could contribute to cleaner air and water for communities across the U.S. Research shows that shifting to plant-based diets could reduce deaths from agricultural air quality by 83 percent. Working with agricultural partners to restore soil health and promote regenerative practices for producing plant-based foods can also play a part in healing our land and water.

We look forward to working with policymakers like the EPA to ensure holistic solutions and strategies are leveraged to ensure our food system transitions towards prioritizing plant-based foods in an effort to support and nourish everyone across the supply network.