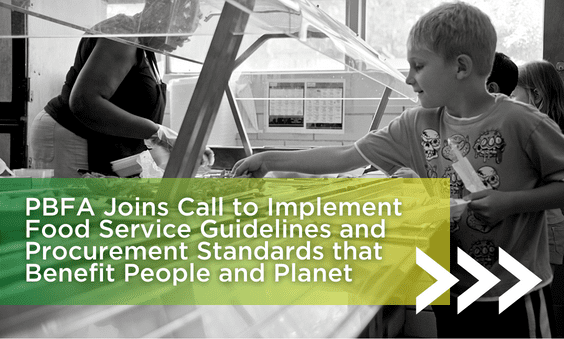 PBFA is proud to join 46 organizations in urging President Biden and the Assistant to the President for Domestic Policy Ambassador Susan Rice, as part of the upcoming White House Conference on Hunger, Nutrition, and Health, to issue an executive order to implement the Food Service Guidelines (FSG) for Federal Facilities and values-aligned federal food procurement standards.

The FSG were developed by an interagency working group led by the Centers for Disease Control Prevention (CDC). These guidelines are evidence-based, voluntary best practices to align food service in federal facilities with the  Dietary Guidelines for Americans and advance food safety, facility efficiency, environmental support, and community development.

Since their inception in 2011, voluntary uptake of the FSG in federal facilities has been sporadic at best,  with limited data available on implementation. As the groups detail in the letter, the Executive Order should establish a timeline and process for developing and implementing comprehensive, values-driven food procurement standards for federal agencies, whether as part of the  FSG or another mechanism. In addition, the federal government is urged to align its food purchasing around local economics, environmental justice, nutrition and health, racial equity, worker justice, animal welfare, and transparency in supply chain data. Taking such action could also enable the Biden administration to leverage the FSG or other measures to promote racial equity and mitigate climate change in a way that is consistent with the goals of previously issued executive orders.

Federal food programs, such as those in schools, hospitals, and correctional facilities traditionally consist of meals with high amounts of animal-based foods and lack plant-based entrée and milk options. Plant-based foods and diets have consistently been proved to be beneficial to both human and planetary health. Eating primarily plant-based foods, rich in fiber and essential nutrients, is central to healthy and nutritious diets and is linked to lower rates of chronic diseases such as heart disease, cancer, and type 2 diabetes. While all communities would benefit from increased access to healthy plant-based foods, BIMPOC communities are disproportionately impacted by our current industrial animal agriculture-dominated food system.

Producing plant-based foods emits about half the amount of greenhouse gas emissions compared to animal-based foods. Because of their lower environmental footprint, predominantly plant-based diets would also help reduce the health impacts of climate change, air pollution, water contamination, and other environmental events, which are associated with a higher risk of developing illnesses, such as inflammatory diseases and allergies.

The letter encourages the government to follow the path of federal energy procurement, which has accelerated the transition to clean energy across the  U.S. economy. In the same way, food procurement and service can be drivers for the just, healthy, and sustainable food system we desperately need. This proposal is timely not only because it would be a fitting strategy to be announced at September’s conference, but also because the CDC recently reconvened the Federal Food Service Guidelines Workgroup. As the letter concludes, interagency collaboration is an ideal forum to support policy development and implementation.

PBFA is heartened to join this coalition of organizations and looks forward to furthering progress toward a federal food procurement plan that benefits people, planet, and animals alike.