The Launch of ‘Just Ice Tea’: How Seth Goldman and Eat the Change are paving the way for transparency and equity in their new product line 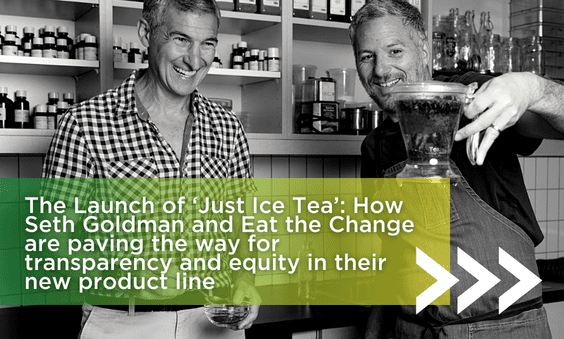 When it comes to building a food company that centers on the values of equity and sustainability, Seth Goldman has been at the forefront of mission-driven brands for years. Seth is the co-founder of PBFA member company Eat the Change, an innovative plant-based snack company that creates chef-crafted products using upcycled ingredients. He also plays a pivotal role on the board of PBFA company Beyond Meat, co-founded a plant-based burger restaurant PLNT Burger, and notably prior to breaking into the food space, Seth co-founded renowned Fair Trade, organic tea company, Honest Tea, and served as “TeaEO” for over 20 years.

In many ways, the success of Honest Tea paved the way for the ethos of the growing plant-based foods industry we see today in that the company demonstrated the value of building “better” into every step of the supply network. Honest identified the consumer desire for a ready-to-drink lightly sweetened tea that not only was convenient, boasted the health benefit of being organic and tasted great, but also enabled them to use their dollars to support improved wages and working conditions for the tea growers themselves.

Recent research from Harris Poll, commissioned by Google Cloud, found that a staggering 82% of shoppers want a brand’s values to align with their own and they are often willing to pay more for these products. Seth and the Honest Tea team saw this vision for the success of values-aligned brands in the early 2000s and its value ultimately led The Coca-Cola Company to acquire Honest in 2011. With this acquisition, Honest Tea was able to extend its reach to over 100,000 retail outlets across the U.S., including major restaurant chains like McDonald’s and Wendy’s – and in turn, provide more funding back to local tea growers and extend their organic certification to 100% of their line.

Unfortunately, after years of success, Coca-Cola recently announced they would discontinue Honest Tea in late 2022. When news hit, Seth was understandably “gutted” by the decision. Not only did this shift mean interested consumers wouldn’t be able to access the teas they had grown to love, but the tea growers, suppliers, and partners that had worked with Honest Tea for decades stood to suffer. In a quick pivot, Eat the Change announced in July of 2022, they would pick up where Coke left off. In an interview with PBFA, Seth Golman shared: “Over the past +23 years, we’ve been involved in Fair Trade and sourcing teas from around the world. With every pound of ingredients we buy, a premium goes back to the supplier so they can fund initiatives such as a roof for a village school, health or eye care for an entire village, or even a playground for a local school. We’ve also seen that Fair Trade economically empowers women by emphasizing education for girls and giving women a say in how the premiums are allocated.”

Understanding the precedent that Coke’s decision could signal a market setback for Fair Trade and organic supply networks, Seth expanded, “ I believe they [The Coca-Cola Company] do not have an accurate reading of where consumers are headed.  Because tea is one of the world’s cheapest commodities, we can incorporate Fair Trade and organic commitments into our drinks and still only pay a few cents per bottle for some of the world’s highest quality teas. I believe consumers will value that commitment, especially as the marketplace shifts toward more transparency and accountability.”

Seeing the potential to continue the legacy of a better supply network and conditions for all involved, Seth and the Eat the Change team (many of whom were part of the core team that built Honest Tea), got to work envisioning “Just Ice Tea.”

“At Eat the Change, our goal is to promote planet-friendly diets. And of course, our commitment to plant-based and organic recipes is front and center,” said Seth. “We chose the name ‘Just Ice Tea’ because the name directly speaks to the set of working standards and environmental principles we aim to support. We are committed to Fair Trade Certified sourcing which involves third-party inspections and ensures all our suppliers comply with International Labor Organization standards (including no child or prison labor). ‘Just’ also speaks to the authentic taste of the teas as well as the ‘Just Sweet Enough’ taste profile.”

Thanks to their commitment to building authentic partnerships with tea suppliers via their work building Honest Tea, the Eat the Change team is hoping to launch Just Ice Tea in October.

“I can now say from personal experience that there is no downside to building a brand you can believe in. Because even if the brand doesn’t ultimately survive, you won’t regret doing the right thing.”

Expanding on the benefit of building a brand that embodies authenticity and demonstrates the power of transparency to suppliers and consumers, Seth stated: “At Eat the Change, we lead with transparency in everything we do. This starts internally and translates to the ethical claims on our packaging all the way through our external marketing channels. We uphold these practices by letting our community be a part of the conversation and influence the way we work and products we produce. In just a day, we saw nearly 1 million views on our LinkedIn reacting to the Coca-Cola news and were able to build an impactful, collective community conversation that sparked the birth and future of Just Ice Tea.”We look forward to following the growth and expansion of Just Ice Tea along with the continued success of Eat the Change. To learn more about the origin story of Eat the Change and the delicious plant-based snacks they make, check out our Member Spotlight here and be sure to follow them on social media @EatTheChange.