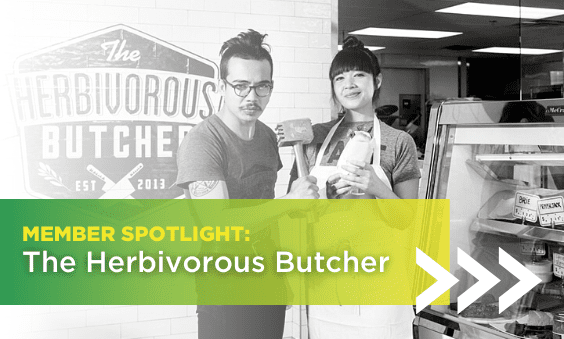 In honor of Asian American & Pacific Islander (AAPI) Heritage Month, the PBFA team had the pleasure to interview co-founders of The Herbivorous Butcher, Aubry and Kale Walch. Raised in Guam and immersed in Guamianian cooking, the sibling duo use their knowledge of beloved foods from their childhoods to create their most coveted products. The Herbivorous Butcher was founded in Minneapolis, Minnesota, and the team currently operates out of two restaurants (a butcher shop and a plant-based fried chicken shop). The Herbivorous Butcher’s mission centers “compassion” in every action, evident in the charitable opening of a 501(c)3 farm sanctuary, Herbivorous Acres, a place Aubry and Kale created to give farmed animals a more meaningful life.

What is the history of The Herbivorous Butcher and the inspiration behind its founding?

Aubry: I’d like to say that it was strategic but really the idea came out of desperation for the recipes that we grew up with and dearly missed as vegans. Well, that and the glaringly obvious need to create products that could help cure people of their addictions to animal proteins. And then at the base of it all, the reason to be vegan in the first place, to end the suffering of animals and to join the fight against climate change. But our official story is and depending on who’s asking; Kale and I started THB because as very hungry vegans we recognized a “meat” sized hole in the market that desperately needed to be filled.

We don’t want everyone to know that this is just a ploy to turn omnis into herbies. Ask Kale and he would say, “it’s all smoke and mirrors.”

What do people need to know about The Herbivorous Butcher’s mission, values, and objectives?

Aubry: Our mission is simple and synonymous with our values and objectives: we want to help people eat better and with compassion so that they can make their way towards compassion in all aspects of their life, whether it be letting that merging car into your lane or bringing that reusable grocery bag into the store with you. We believe that if we can slowly train ourselves to make that compassionate choice once a day, we can eventually do it a dozen times a day. Let it start with the compassionate decision to keep animals off our plates.

How have the circumstances of the past couple of years impacted the work that you do everyday? How has The Herbivorous Butcher navigated these challenging times?

Kale: The pandemic forever changed how we do business—in the months before the lockdowns began we had been planning a production facility to launch a few of our products into grocery stores around the country, but of course, the banks weren’t willing to fund such a venture in such uncertain times. At the shop, like everyone, we were scared about making it through, so we began to offer “hot-and-ready” meals at the butcher shop for the first time, to try to attract new customers to this new world of curbside pickup.

I had been working on a new chicken recipe at the time so we decided to offer fried chicken as our first hot meal—and it went so crazy that we wondered, “What if we had a little shop that actually had deep fryers instead of pots of oil on a stovetop?” And that’s how we came to open a vegan fried chicken shop, Herbie Butcher’s Fried Chicken, in May 2021.

What about your work at The Herbivorous Butcher motivates you, inspires you, or makes you optimistic about the future?

Kale: Every time someone makes even a small decision to keep animals off their plate, a seed of compassion is planted in them—a small ripple that could grow into a wave. Perhaps if they could extend this compassion to an animal, they could also extend this compassion to a fellow human, and the chance to create more of those interactions in the world is what will bring about change in the world. Realistically, the whole world can’t go vegan all at once, but cultivating compassion is what keeps me going every day

What has been the most rewarding moment or pivotal milestone you have witnessed during your time at The Herbivorous Butcher––as both a plant-based business and an AAPI-owned business?

Kale: For me, it was the moment we knew that we were going to hit our Kickstarter goal to build our shop in the very first year of our existence (2014). Until that moment, I thought Aubry and I would be selling at the farmers’ market for years to raise enough money, and with the tumultuous nature of Kickstarter campaigns, things were very uncertain until the end. After that, things just kinda snowballed into where we’re at now—a place I never imagined we would be.

Can you tell us a bit about the Herbivorous Acres farm sanctuary and the kind of work you do there?

Aubry: Herbivorous Acres is a 501c3 nonprofit farm sanctuary that was incorporated in 2016 and set out on a mission to rescue, rehabilitate, and educate. By providing sanctuary to farmed animals that have been mistreated, abused, and neglected, our organization works to create a more meaningful life for animals and educate the community about animal welfare and rights. We create an inclusive environment that allows people to meet farm animals, learn more about how the benefits of plant-based living positively affects farm animals, and learn about how to advocate for them.

Having been raised in Guam in a culture that values food so deeply and often has at least “two different kinds of meat or seafood” in every meal, can you share a bit about your experience integrating your knowledge of Guamanian cuisine and cooking to create plant-based meat alternatives?

Aubry: Guam is a melting pot of so many cultures from all over the world. Chamorro cuisine itself is a combination of the many countries that have occupied the island over the years, in conjunction with ingredients that are native to the island and used by the indigenous people. To know Chamorro cooking is to know beautiful food from all over the world. Kale and I use the love of food that was ingrained in us as kids to create many of our most coveted products. Our different varieties of ribs, the Huli Huli ribs, Korean bbq, and Smoky House, are all versions of family recipes that we loved when we were little.

Based on your experience, what advice would you give to those aspiring to start their own plant-based company, expand into the plant-based arena, or generally make waves in the sector?

Kale: When we first started at the farmers’ market in 2014 things were hard; we would be cooking and packaging all night, squeezing in an hour or two of sleep before loading all our products up into coolers and hauling them to the market. And the more difficult it gets (in general) the better you’re doing, but perhaps the most important thing is your belief in yourself and your product. Having the self-awareness that you put everything you could into your product must fuel your belief that your product, whatever it might be, is the best in the world. This confidence will get you through the painful early days and will carry you through the rest of your career.

Can you give us a sneak peek into any notable news or exciting product launches in the pipeline for 2022?

Kale: Nothing specific to speak of right now, but I can say that we’ve had a lot of fun with Herbie Butcher’s Fried Chicken, and who knows what else we’re hungry for?

Where can people learn more about The Herbivorous Butcher and find you online?

Auby: You can find us online and build your own box of vegan meats and cheeses at www.theherbivorousbutcher.com or if you’re in Minneapolis visit our butcher shop in NE Minneapolis or our fried chicken shop in south Minneapolis www.herbiebutchersfriedchicken.com