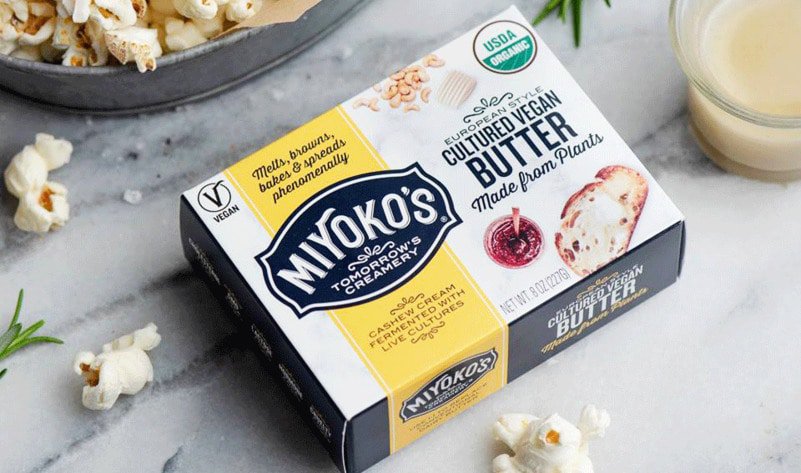 Status (4/13/21): A win! Miyoko’s decision to label its product as ‘butter’ is entitled to First Amendment protection. PBFA submitted a declaration in support of Miyoko’s.

The Plant Based Foods Association (PBFA) applauds the recent court decision in favor of Miyoko’s Creamery, rejecting the State of California’s Motion to Dismiss in a First Amendment challenge, giving the company a win in round one of its legal fight with the state over the use of the term “plant-based butter.”

PBFA, though a declaration by its executive director, Michele Simon, weighed in on Miyoko’s behalf in the lawsuit, explaining that the state’s Milk and Dairy Food Safety Branch’s attacks on PBFA’s other members have also caused them to have to choose between truthfully conveying what their foods are and facing severe enforcement action by the State of California.

The Court cited Simon’s declaration where she said the state’s letter to Miyoko’s “did not altogether come as a surprise,” and that: “The aggressive enforcement posture of the Milk and Dairy Food Safety Branch has been an ongoing topic of conversation at PBFA board meetings”, to make clear the state’s unwarranted campaign against PBFA members was a cause for serious concern and fear.

“This decision is an important step towards victory for both Miyoko’s and the entire plant-based foods industry,” said Michele Simon, executive director of the Plant Based Foods Association, today after the court’s decision. “The state of California has been unfairly attacking our members for years, all at the behest of the dairy lobby. Now Miyoko’s will get its day in court to ensure the state stops this needless meddling.”

Simon, weighing in on behalf of the entire plant-based food industry as executive director of PBFA, wrote in her declaration that “[b]eing able to use commonly understood terms like “vegan butter” and “almondmilk” is essential for the success of PBFA members. It ensures consumers understand what products will taste like, their consistency, and how they can be used.” The Court cited this declaration, noting that California “should have been aware, its interpretations of state and federal law threaten the viability of not just the ‘vegan butter’ product, but of Miyoko’s entire business model.”

California, though its Department of Agriculture’s Milk and Dairy Food Safety Branch, unjustly and unconstitutionally threatened Miyoko’s in December 2019. The Department, misinterpreting the state’s own free speech and food labeling laws, inappropriately wrote to Miyoko’s informing the company that the label for its “vegan butter” product failed to comply with state and federal law. In response, Miyoko’s filed a lawsuit stating that the Department’s order violates the First Amendment and that the advertising and packaging for the product is neither misleading nor deceptive since its references to butter are qualified by words such as “plant-based” and “vegan”.

Miyoko’s Creamery, which is represented by the Animal Legal Defense Fund, will proceed with its Motion for Preliminary Injunction, which the company already filed, and will wait for the hearing to be set in the coming months. Miyoko Schinner, founder of the company, is a founding board member of the association. PBFA will continue to defend the interests of plant-based food companies whenever and wherever they are threated, while actively working to maintain a level playing field for the industry.