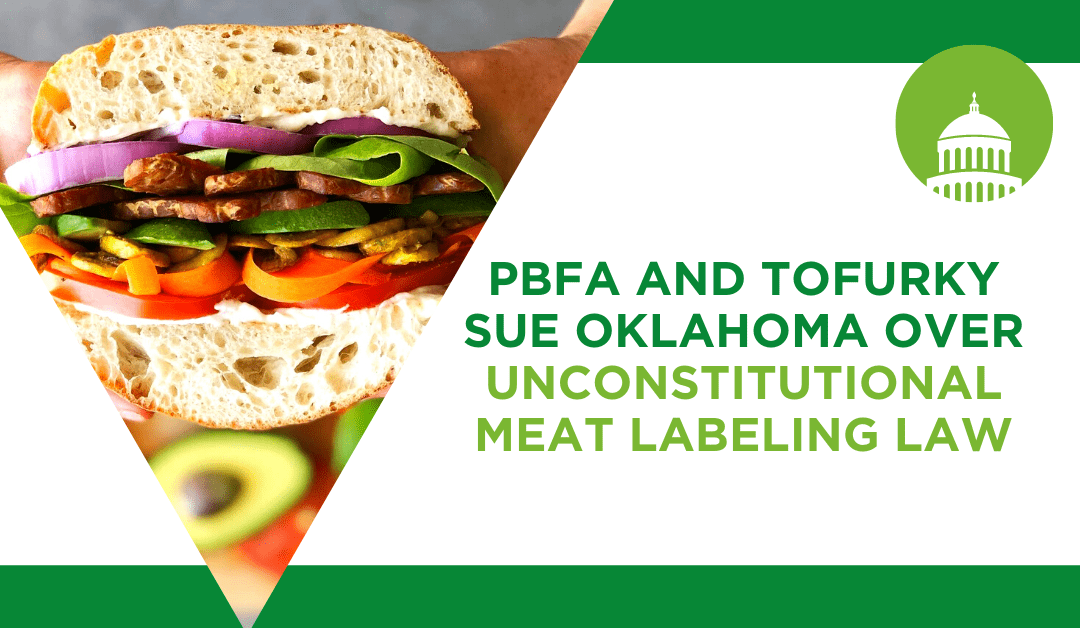 Today, the Plant Based Foods Association and founding member company Tofurky teamed up to challenge Oklahoma’s unconstitutional meat labeling law. Partnering with the Animal Legal Defense Fund (ALDF), PBFA and Tofurky filed a complaint against Oklahoma’s Meat Consumer Protection Act that includes claims under the dormant Commerce Clause, the Due Process Clause, and the Supremacy Clause of the Constitution.

The Oklahoma Meat Consumer Protection Act, which PBFA has staunchly opposed since its inception, imposes vague and burdensome disclosure standards on plant-based meat companies that seek to sell their products in the state–including a requirement that product labels include a disclaimer as large and prominent as the product’s name itself indicating that the foods are plant-based.

Oklahoma’s law is unnecessary, unconstitutional, and places undue cost and burden on companies that are already clearly marketed and labeled as plant-based. This sort of anti-competitive behavior is not only damaging to plant-based food companies, but also to Oklahoma-based retailers that seek to sell their products in concert with growing consumer demand.

“This law institutes a protectionist barrier that contravenes and is preempted by federal law,” said Nicole Negowetti, PBFA’s Senior Director of Policy. “The Oklahoma Meat Consumer Protection act is based on ​​false assertions by animal meat lobbyists that plant-based food labels are confusing to customers. Allegations of confusion are without evidence and are designed to curtail the explosive growth of plant-based foods, driven by consumers’ embrace of the significant environmental, social, and health benefits of eating plant-based. Because of the tremendous human and planetary health advantages of plant-based foods, Oklahoma lawmakers should seek to create a fair marketplace for companies that make plant-based meats, rather than wasting time and resources on unconstitutional laws that restrict their success.”

“The plant-based industry has been experiencing enormous growth in recent years precisely because consumers are actively seeking out better food options,” said Jaime Athos, President and CEO of Tofurky. “They want foods that are better for the planet and for their own health and are using their dollars to vote for a better, more sustainable future. This Oklahoma law is ultimately not about protecting consumers. It’s about limiting their choices in a nakedly protectionist attempt to shore up animal agriculture industries. Plant-based consumers are some of the most well-informed and thoughtful about their food choices and it is insulting to assert — without any evidence I might add — that they are choosing plant-based products over and over at store shelves because they have been deceived. Tofurky is here to challenge this disingenuous legislation not just on behalf of our industry, but ultimately to protect our consumers’ right to make choices that are healthier for their bodies and more congruent with their values.”

Oklahoma’s law is one of several similar attempts by the meat industry to stymie competition, and PBFA will continue to work collaboratively with our members and lawmakers to defeat legislation that aims to hinder the success and growth of the plant-based foods industry. PBFA has created voluntary labeling standards for plant-based meat companies and the Certified Plant Based seal as common-sense measures to ensure that clarity and consistency in labeling are upheld to protect plant-based food companies and consumers alike.

Protecting the rights of plant-based food companies and leveling the playing field for the industry remains a top priority, and with the support of our members and partners, PBFA remains dedicated to facing these legal challenges with confidence that the law, and common sense, are on our side.