PBFA Comments to the FDA Regarding the Climate Crisis 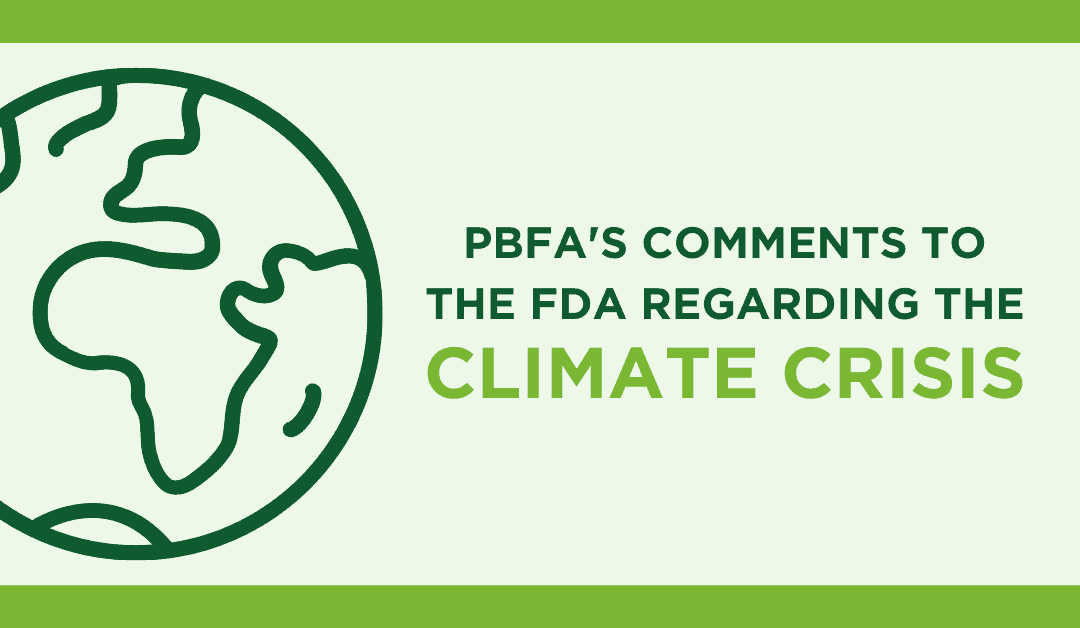 On behalf of the Plant Based Foods Association, I am writing to offer comments on President Biden’s Executive Order on Tackling the Climate Crisis. The Plant Based Foods Association is the only trade association in the U.S. representing over 195 of the nation’s leading plant-based food companies. PBFA’s mission is to build a strong foundation for the industry to scale and thrive. PBFA empowers the industry by advocating for government policies that allow fair competition, while expanding market opportunities for retail, distribution, and foodservice to support the continued growth of the plant-based foods industry.

Encouraging an American transition to a plant-based diet supplied by American farmers is one of the leading ways we can cut greenhouse gases and mitigate climate change. Avoiding meat and dairy is shown to be the single most effective way to reduce our impact on Earth.[1] Plant-based diets are the most efficient way to feed the world: For every 100 calories of human-edible crops that we feed to animals, we only get 17-30 calories back in the form of meat or milk.[2] The National Academy of Sciences is clear about the tremendous potential that plant-based diets have to affect climate change, concluding in a 2018 report that “shifting to plant-based diets confers substantial environmental savings, comparable to or even surpassing projected improvements in agricultural productivity.”[3]

Such transformational action would create new opportunities for farmers and rural communities: For example, the EAT-Lancet Commission notes that the production of fruits, vegetables, nuts and legumes will need to more than double to meet global needs by 2050. This corresponds with a PBFA comprehensive ingredient mapping project in 2019, which revealed that the top crops used to make plant-based ingredients are soybeans, dried peas, chickpeas, oats, and wheat. Growing these crops as part of diversified crop rotations will have multiple climate benefits, starting with soil conservation and water quality. Diversified rotations that include crops such as peas, lentils and oats reduce nitrogen use, improve soil structure, and conserve water.

USDA can utilize its programs and authorities to support the plant-based industry in three ways:

2) Inclusion of plant-based foods in all USDA-funded feeding programs, including the National School Lunch and Breakfast programs, Child and Adult Care Feeding program, Summer Food Service program, and Women, Infants and Children (WIC) program, among others.

In addition to awareness of the climate implications of livestock production, a growing number of Americans are choosing not to eat meat for health, animal welfare, or cultural reasons. Nearly one in four Americans (23%) report eating less meat in the past year than they had previously, Gallup reports.[5]

As USDA strives to represent Americans of all racial and ethnic backgrounds, prioritizing plant-based foods in government-funded feeding programs is critical.

The role of government must be to foster competition, rather than pick winners. Plant-based foods are increasingly sought after by consumers. We have been discouraged by the actions of animal-based Federal checkoff programs to stifle competition and disparage plant-based foods. PBFA urges careful oversight to ensure against new attacks on plant-based foods by other sectors of the agricultural community.

On behalf of the Plant Based Foods Association, we stand ready and eager to tackle the climate crisis with USDA. Thank you for considering our views.

[5] Nearly One in Four in U.S. Have Cut Back on Eating Meat (gallup.com)