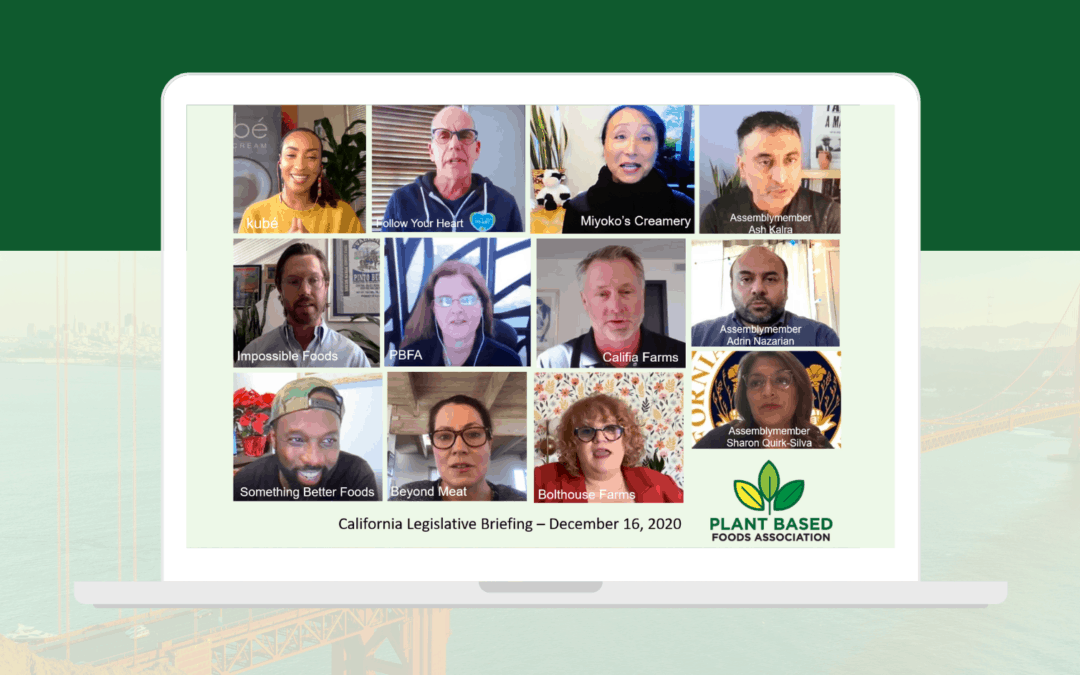 The goal of the forum was to raise awareness around the plant-based foods industry among policy leaders. Topics covered at the Zoom-based Supporting California’s Thriving Plant Based Foods Industry Through Policy legislative briefing included the values driving the industry, growth plans, and ways that state policy can work to bolster plant-based food innovation.

The forum was attended by more than six dozen California state legislative leaders and staff. Eight leaders of PBFA members based in California shared their company’s origin stories, why they are headquartered in California, their respective visions for the future, and their use of California produce and local sourcing. Noted Simon, “Many of the core values that California represents are embodied in these brands, such as concerns for public health, climate change, animal welfare, and most importantly, giving back to the community.”

PBFA members that participated in the event spoke passionately about their missions:

We all had a robust conversation about plant-based policy initiatives, including a state bill last session authored by Assemblymembers Nazarian and Kalra to increase funds to expand plant-based entrees and plant-based milk options in California schools. Assemblymember Quirk-Silva spoke in support of the need for increased public school funding to increase healthier, plant-based options for students. She is committed to working on sustainability and supporting plant-based foods as an effective way to combat climate change.

We also discussed PBFA’s successful defensive measures to fight unjust and unnecessary attempts by dairy and meat lobbyists to restrict the First Amendment rights of the plant-based food industry to fairly and accurately label their foods. Assemblymember Kalra spoke about the need for truth-in-advertising and applauded PBFA for fighting for the plant-based food industries’ labeling rights.

The event was organized by Sacramento-based Fearless Advocacy.

About the Plant Based Foods Association: The Plant Based Foods Association (PBFA), with over 175 member companies, is the nation’s first and only trade association representing the rapidly growing plant-based foods industry. Our mission to build a strong foundation for the plant-based foods industry to succeed and thrive. Learn more at www.plantbasedfoods.org.