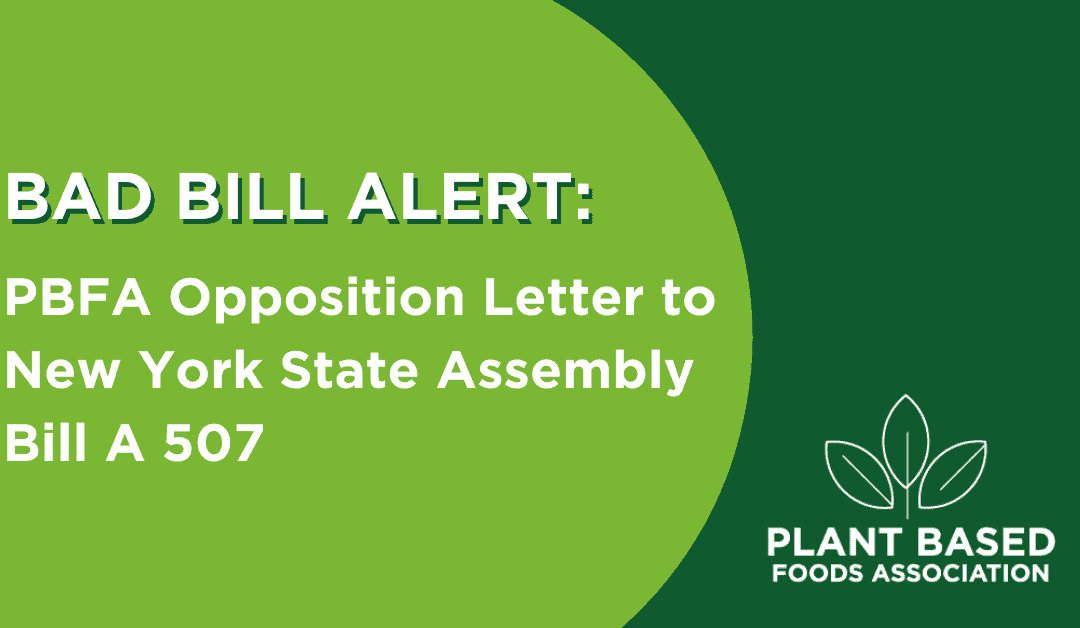 Status (4/13/21): PBFA has submitted testimony written by Board President Nicole Sopko in opposition of the bills, which would infringe on the First Amendment rights of PBFA’s members, on January 27, 2021. There is a Partner bill in the senate: S2656, which shares language and current status of A 507.

On behalf of the Plant Based Foods Association (PBFA), the trade association representing the plant-based food industry, I am writing in opposition to New York State Assembly Bill A 507, which “provides that only products containing milk may use the term ‘milk product’ on label and advertisements” and “defines ‘milk product.’’’ In an era of increasing innovation in the food industry, this legislation would send a chilling message to small and emerging businesses: The marketplace is rigged against you in favor of entrenched and powerful special interests.

PBFA was founded in 2016 to represent a rapidly growing industry comprised of companies producing plant-based meat, egg, and dairy. The association has quickly grown to include more than 180 members, ranging from small start-up food companies to established national brands to ingredient suppliers and restaurants. Many PBFA members make and sell plant-based dairy, including plant-based milks, cheeses, yogurts, and ice cream.

A 507 is unconstitutional. The intent of the bill is a clear violation of the First Amendment, infringing on the free speech rights of plant-based food companies to communicate with their customers in a truthful, non-misleading manner.

Companies selling plant-based dairy foods are using easy-to-understand, clear, descriptive, and truthful language on labels, including words such as “milk,” “cheese,” “yogurt,” and “butter.” To our members, and to consumers, these words represent functionality, form, and taste, not the origin of the primary ingredient. Companies also are using clear and well-understood qualifiers such as “non-dairy,” “dairy-free,” or “plant-based.”

A 507 is a solution in search of a problem: consumers are not confused about plant-based milk. They are purposefully seeking out plant-based dairy for a variety of personal reasons. Moreover, about half of households are purchasing both plant-based and cow-based milk. Consumers buy plant-based dairy because they fill the functional role of milk, cheese, yogurt, and butter, and precisely because they are not traditional, milk, cheese, yogurt, or butter. Accordingly, A 507 is unnecessary and would inject confusion into the marketplace by requiring changes to labels that consumers have long understood. The bill would ultimately harm consumers by causing disruption and fewer options in the market at a time when consumer tastes are rapidly changing.

PBFA and its members are committed to clear labels for their foods; labels that make it easy for consumers to identify and choose the foods they are seeking. PBFA has an active Standards Committee, which has released voluntary labeling guidelines for plant-based milks and yogurt, and is currently working on similar standards for other dairy categories such as cheese.

In addition, PBFA maintains a robust third-party certification with NSF for food companies to obtain the “Certified Plant Based” stamp. Compliance with this program ensures that products are free of any animal ingredients. Dozens of products made by PBFA members and non-members alike have already either been certified or are currently going through the process of getting approved. PBFA has also incorporated our voluntary standards into the Certified Plant Based assessment. In other words, all relevant products that are approved for the Certified Plant Based seal will also need to comply with PBFA’s voluntary standards for the relevant category.

Finally, sadly, this bill does nothing to help dairy farmers, who are struggling every day. PBFA empathizes with the economic hardship faced by many of America’s dairy farmers. Tragically, the dairy lobby avoids their industry’s real economic troubles: over-production, consolidation, corporate takeover of family farms, and a lack of innovation. It may be easier to blame their problems on the plant-based foods industry, but it’s neither not helpful nor accurate. It’s a disingenuous distraction from real issues and a disservice to dairy farmers.

Consumers have settled this debate, if there ever was one, and it’s time for the dairy lobby to move on and address real, fundamental structural and economic problems facing America’s dairy farmers.

The Environment and Transportation Committee should reject A 507 on the grounds that it is not sound public policy; instead, it reflects an effort by one industry to stifle the progress of another and is an attack on the First Amendment rights of our members to communicate with their customers in a truthful, non-misleading manner.