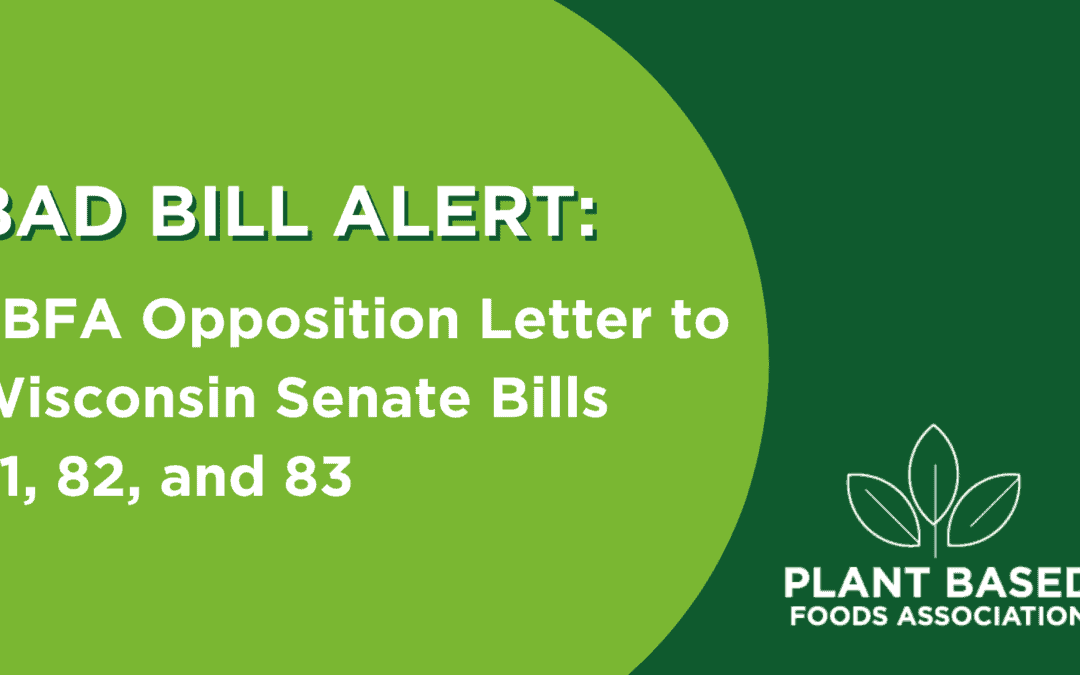 Status (4/13/21): PBFA has submitted testimony in opposition of the bills, which would restrict plant-based food companies’ right to use commonly understood terms for plant-based dairy (81), meat (82), and milk (83) products on February 8, 2021.

On behalf of the Plant Based Foods Association (PBFA), the trade association representing the plant- based food industry, we submit comments in opposition to Wisconsin Senate Bills 81, 82, and 83, which would restrict plant-based food companies’ rights to use commonly understood terms for plant-based alternatives to animal products. As presently drafted, each bill presents a misguided attack on innovation and all food producers’ free speech rights to use words and phrases that consumers understand.

PBFA was founded in 2016 to represent a rapidly growing industry comprised of companies producing plant-based meat, egg, and dairy. The association has quickly grown to include more than 180 members, ranging from small start-up food companies to established national brands to ingredient suppliers
and restaurants. Many PBFA members make and sell plant-based dairy, including plant-based milks, cheeses, yogurts, and ice cream.

SB 81, SB 82, and SB 83 are unnecessary, unconstitutional, and misguided. Each bill presents an attempt to impose new restrictions on how plant-based companies communicate with their customers, infringing on their First Amendment rights to label their foods with clear, non-misleading terms.

Companies selling plant-based foods use easy-to-understand, clear, and descriptive language on their labels, including words such as “yogurt,” “milk,” and “sausage” with well-understood qualifiers. Plant- based milk and dairy use qualifiers such as “non-dairy” and “dairy-free,” while plant-based meats use language including “meatless” and “meat-free.” All segments of the plant-based market can utilize the term “plant-based” to make their labels clear to consumers.

Consumers are not confused about plant-based foods. They purposefully seek out plant-based options for various personal reasons, including taste, health benefits, environmental impact, and animal welfare.

Consumers buy these products specifically because they are not traditional milk, dairy, or meat. Accordingly, these bills are unnecessary and would inject confusion into the marketplace by requiring changes to labels that consumers have long understood. The bill would ultimately harm consumers by causing disruption and fewer options in the market at a time when consumer tastes are rapidly changing.

PBFA and its members are committed to clear labels for their foods; labels that make it easy for Wisconsin consumers to identify and choose the foods they are seeking. PBFA has an active Standards Committee, which has released voluntary labeling guidelines for plant-based milks, meats, and yogurt. The association is currently working on similar standards for other dairy categories such as cheese.

In addition, PBFA maintains a robust third-party certification with NSF for food companies to obtain the “Certified Plant Based” stamp. Compliance with this program ensures that products are free of any animal ingredients. Dozens of products made by PBFA members and non-members alike have already either been certified or are currently going through the process of getting approved. PBFA has also incorporated our voluntary standards into the Certified Plant Based assessment. In other words, all relevant products that are approved for the Certified Plant Based seal will also need to comply with PBFA’s voluntary standards for the relevant category.

Our members are in full compliance with current FDA requirements. Attempts to impose new restrictions such as these run afoul of First Amendment protections allowing companies to label their foods with clear, non-misleading terms. Because the First Amendment prevents the government from restricting the free flow information to consumers except in extremely narrow circumstances, laws such as proposed in SB 81, 82, and 83 are unlikely to withstand constitutional scrutiny.

For example, an Ohio law that precluded use of word “butter” in labeling or advertising any product that was made in imitation of or substitute for butter, without regard to whether such use was misleading, was ruled unconstitutional. Lever Bros. Co. v. Maurer, 712 F. Supp. 645 (S.D. Ohio 1989). Likewise, a Washington law prohibiting use of dairy terms in advertising margarine was deemed per se violative of the First Amendment. Anderson, Clayton & Co. v. Washington State Dep’t of Agric., 402 F. Supp. 1253 (W.D. Wash. 1975). In recent years, the Supreme Court has affirmed and re-affirmed that these types of restrictions are unconstitutional.

As such, each recent instance of such speech-restrictive legislation has been subject to legal challenge by a coalition of plaintiffs including some combination of PBFA, PBFA company members, the American Civil Liberties Union, the Institute for Justice, and the Good Food Institute.

To the mitigate risk of litigation, at minimum, instead of banning terms outright, SB 81, 82, and 83 should be amended to allow use of qualifying terms – consistent with the above mentioned PBFA labeling standards for plant-based meat and dairy – as several states have recently done.

Finally, and unfortunately, this bill does nothing to help Wisconsin. Plant-based food companies present a tremendous opportunity for American farmers. By working to rig the system against the plant-based foods industry, these bills hinder the potential for farmers to benefit from this exponentially growing segment. While it may be easy to blame the problems farmers face on the plant-based foods industry, it is neither helpful nor accurate and a disservice to farmers.

Competing industries must not be allowed to stifle the exponential growth of plant-based food to further their agendas. It is time for the meat and dairy lobby to move on and address the real, fundamental structural and economic problems facing America’s farmers.

The Wisconsin Senate should reject Senate Bills 81, 82, and 83 on the grounds that they are not sound public policy; instead, the bills put the government in the position of picking winners and losers in the market. Each bill is a direct attack on our members’ First Amendment rights to communicate using terms that have been accepted as the common and usual names for more than 30 years without confusion.