PBFA Submits Comments to FDA on Labeling of Plant-Based Milk 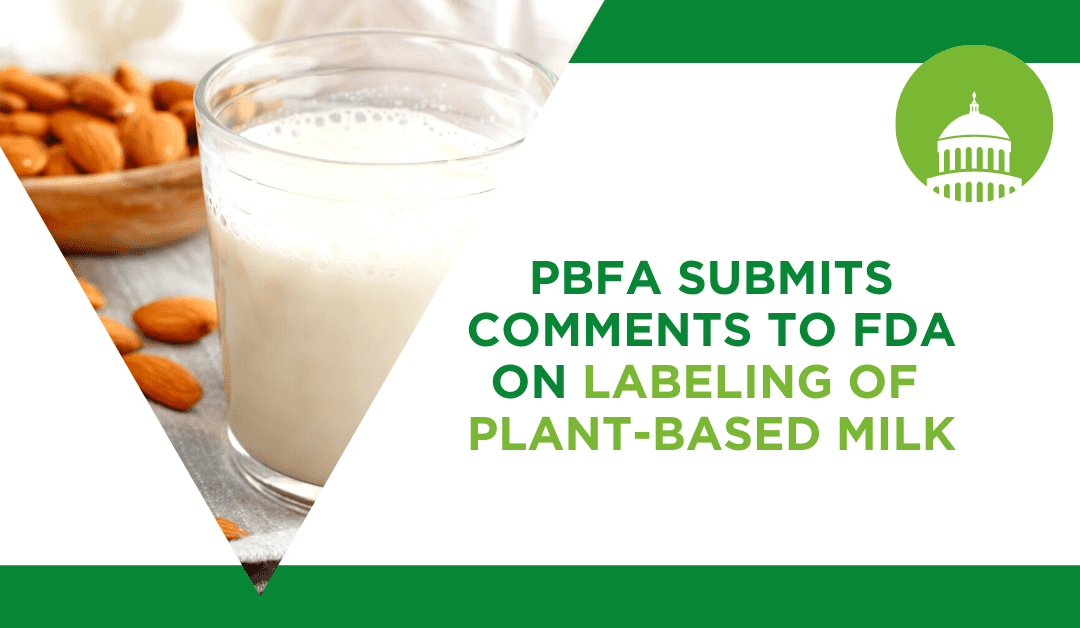 The U.S. Food and Drug Administration (FDA) is set to issue guidance on the topic of “Labeling of Plant-based Milk Alternatives; Draft Guidance for the Industry” by the end of June 2022. To inform that forthcoming guidance and ensure a fair marketplace, the Plant Based Foods Association recently submitted comments to the FDA on behalf of the plant-based foods industry.

PBFA urges the FDA to re-affirm its long-standing position to allow use of the term “milk” with appropriate qualifiers like “soy,” “almond,” “oat,” or “plant-based.” Research shows consumers are not confused by plant-based milk labels, and the FDA has long recognized that strict adherence to standards of identity hampers innovation.

Innovations that expand the plant-based market and forge a path to a plant-based foods system are needed now more than ever. As PBFA stated in our comments on President Biden’s Executive Order on Tackling the Climate Crisis, encouraging an American transition to a plant-based diet—supplied by American farmers—is essential to cutting down greenhouse gas emissions and mitigating the devastating effects of climate change. PBFA urges the FDA to maintain its flexible approach to standards of identity, especially at a time when innovation in the food industry is crucial to planetary health.

Further, PBFA asserts that restriction of plant-based milk names would not survive a First Amendment challenge, as there is no evidential proof that consumers are “misled” or in any way confused by such labels.

For all the reasons outlined above, PBFA has urged the FDA to issue guidance that reflects the following principles:

Consumers understand food names such as “almond milk,” “coconut milk,” “oat milk,” “plant-based milk,” and “soy milk.” These terms are appropriately descriptive and beneficial to consumers as they inform them about the taste of and uses for the product. Furthermore, under 21 C.F.R. 102.5, FDA regulations permit the establishment of a common or usual name by common usage. Given the longstanding and increasingly widespread use of names like “soy milk,” “coconut milk” and “almond milk” in the marketplace and the extent to which these names are recognized and used by consumers and the FDA itself, such names have been established as common or usual names through common usage.

As such, in order to provide certainty to manufacturers, the FDA re-affirms its long-standing position that a food shall not be considered to purport to be or be represented as “milk,” under 21 U.S.C. 343(g), solely because its label bears the term “milk” in its statement of identity or elsewhere on the label, provided that the label clearly indicates that the product is plant-based or otherwise not cow-derived by using one or more of the following words or phrases, or a comparable qualifier: plant-based, vegan, animal-free, almond, cashew, coconut, oat, or soy.

As the FDA prepares to issue guidance on this topic, PBFA advises the agency to truly “modernize” its approach to standards of identity by re-affirming a position it has held for half a century: that standardized names can be applied to products that are not, in all respects, the standardized foods—and, more specifically, that the term “milk” may be used with appropriate qualifiers like “soy,” “almond,” “oat,” or “plant-based.”