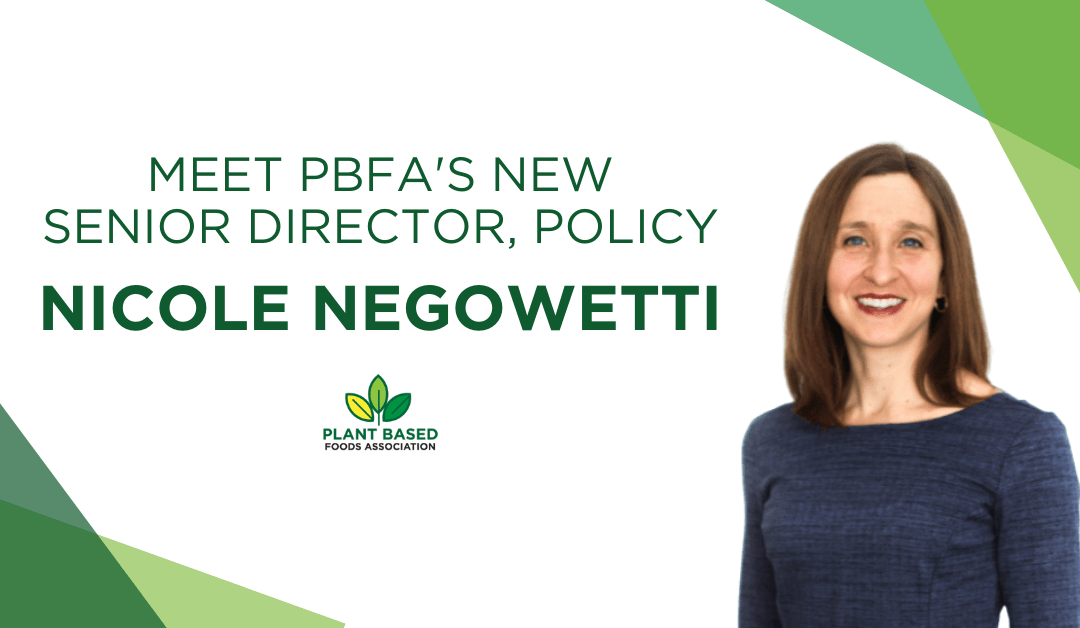 The Plant Based Foods Association (PBFA) is pleased to announce that Nicole Negowetti joined the association as its new Senior Director of Policy. Nicole is an attorney, educator, and scholar whose work focuses on the laws and policies shaping the U.S. agriculture and food system. She is a widely recognized expert on the legal and regulatory issues affecting the plant-based foods industry. Nicole has extensive experience developing and leading federal, state, and local initiatives to promote sustainable, equitable, and healthier food systems.

“I am thrilled to share the news of Nicole’s appointment with PBFA to lead our policy work into expanded and exciting areas in support of the plant-based foods industry and our members,” said Rachel Dreskin, PBFA CEO. “Nicole’s vast knowledge of the industry and policy arena, combined with her sharp strategic skills and collaborative approach, will contribute greatly to PBFA’s ability to ensure the landscape is one in which the plant-based food industry can continue to grow and thrive.

Prior to joining PBFA, Nicole served as a Clinical Instructor and Lecturer on Law at Harvard Law School, where she worked at the Animal Law & Policy Clinic and the Food Law & Policy Clinic in the Center for Health Law and Policy Innovation. Nicole was previously the Policy Director of the Good Food Institute, a nonprofit organization working to accelerate alternative protein innovation. She also served as an Associate Professor of Law at the Valparaiso University School of Law and is a founding member of the Academy of Food Law & Policy. Nicole is a co-founder of the Northwest Indiana Food Council, whose mission is to build a just, thriving, and regenerative food system for all.

“I’m thrilled to join the PBFA team, and I look forward to working closely with member companies, the Board, and staff to amplify the plant-based foods industry’s positive impact in creating an equitable, resilient, and healthy food system,” said Nicole.

Also of note, in November Beverly Paul of Gordley Associates joined the Plant Based Foods Association to spearhead PBFA’s Federal lobbying initiatives. Ms. Paul has represented clients on a wide array of agriculture and nutrition issues at Gordley Associates since 2002. Her practice areas include agricultural conservation and sustainability, nutrition, research, and agriculture data issues. Ms. Paul served as Legislative Assistant for agriculture and trade for Senators Bob Kerrey and Ben Nelson of Nebraska, and was detailed to the staff of then-Majority Leader Tom Daschle for the 2002 farm bill. She holds degrees from the University of Nebraska and the LBJ School of Public Affairs at the University of Texas.

“This dynamic team is not only well-positioned to defend the interests of the industry, but the team’s vast skill, ingenuity, and proactivity puts PBFA in a fantastic position to represent and carve out opportunities for the most exciting sector of the food industry,” said Dreskin.

About the Plant Based Foods Association:

Founded in 2016, the Plant Based Foods Association is the first and only trade association in the U.S. representing over 200 of the nation’s leading plant-based food companies. PBFA’s mission is to build a strong foundation for the industry to scale and thrive. PBFA works to remove obstacles to a fair and competitive marketplace for plant-based foods. PBFA empowers the industry by advocating for government policies that allow fair competition, while expanding market opportunities for retail, distribution, and foodservice to support the continued growth of the plant-based foods industry. Learn more at: www.plantbasedfoods.org.