Politics of Plant-Based Center Stage at Plant Based World Expo 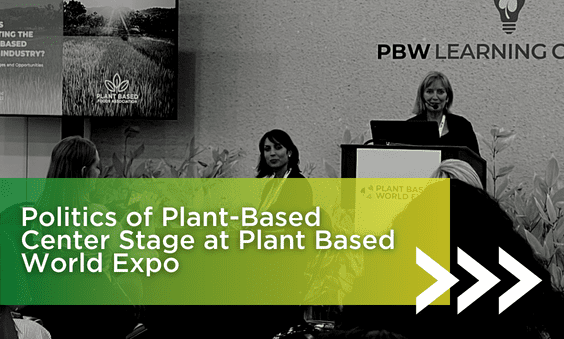 “Constituents matter. Grassroots efforts really matter,” said Bev Paul, Federal Policy Consultant to PBFA, to an engrossed audience at Plant Based World Expo—underscoring the critical role that policy will play in the future of plant-based foods and our broader food system, and the power of every single company and consumer to affect much-needed change at the highest levels.

The holistic nature of the challenges facing our food system were clearly reflected at this year’s Plant Based World Expo, where there was more programming focused on sustainability, domestic sourcing, and the broader political and social forces impacting the plant-based foods industry than ever before. Nowhere was this more apparent than at the “Politics of Plant-Based” session, which placed a microscope on the short-, mid-, and long-term outlook for the industry from a policy perspective, from federal guidance to state laws to municipal initiatives.

This packed session, led by Bev Paul and the Animal Legal Defense Fund’s Amanda Howell, broke down the current and future plant-based policy landscape, including the ongoing fight to battle unnecessary and restrictive labeling laws in states across the country, the present regulatory environment for plant-based and efforts poised to impact it in the coming months and years, and efforts to influence key legislative and executive efforts around agriculture, nutrition, and sustainability with implications for the plant-based industry.

Amanda Howell kicked off the session, harnessing her invaluable animal welfare perspective to dig more in depth into current labeling laws impacting the plant-based industry. In addition to providing a birds-eye view of federal government policies and individual state efforts to curtail plant-based and interfere with consumer choice, she also broke down key legal terminology and considerations driving these discussions—in particular, the role that the concept of “standards of identity” plays in the current labeling policy landscape and how precedent around enforcement of these standards is firmly on the side of plant-based.

Critically, Amanda discussed the arguments put forward by meat and dairy lobbies in their efforts to restrict plant-based labeling, in particular their unfounded claim of consumer confusion over plant-based food labels that use words traditionally associated with animal-based products like “milk” and “butter.” But as Amanda shared—to muted gasps and chuckles from the crowd—the data says otherwise: Not only does survey data indicate that consumers are not confused when plant-based food labels use these words, but in fact, omitting these words actually causes consumers to be significantly more confused about the taste and uses of plant-based products.

Finally, Amanda broke down the status of state-level legal efforts to combat overly restrictive labeling laws—including the ongoing lawsuit in Oklahoma for which PBFA is a plaintiff, alongside founding member Tofurky—and forthcoming guidance from the FDA on the labeling of plant-based milk. PBFA previously sent comments to the FDA encouraging the agency to uphold its current flexible stance on standards of identity, and not place undue labeling and packaging burdens onto plant-based food companies.

PBFA’s Bev Paul then took the stage to discuss policy fundamentals for the plant-based industry and to share key upcoming opportunities to positively impact the future of food. From contacting members of Congress to joining a cross-sector coalition, Bev explained that there are several equally important avenues for affecting policy change.

And as she then shared, there will be ample opportunities for each and every industry and consumer voice to be heard. These opportunities include the upcoming Farm Bill, which represents a critical moment for coalitions to influence policymakers and amplify shared messages; and the Child Nutrition Reauthorization, which includes the Healthy Meals, Healthy Kids Act which would allow and subsidize schools to offer non-dairy beverage options to students, as well as establish a $10 million plant-based school foods pilot program. Also in play are the Dietary Guidelines for Americans, for which the development process is already underway within the federal government, but have incredible power to influence the foods offered in schools, hospitals, and other government institutions across the country.

But perhaps the most salient point revolved around the vital issue of government procurement. PBFA has long advocated for plant-based options to be offered across public sector institutions from parks to prisons, offices to military bases—an effort dubbed “plant-based wherever the federal government serves a meal.” PBFA recently worked with the Environmental Working Group and other coalition partners to submit a letter advocating for this work, signed by nearly 100 chefs.

Bev discussed opportunities to advocate for this essential effort around the then-upcoming White House Conference on Hunger, Nutrition, and Health, which took place on September 28th. The White House has since released a fact sheet laying out a massive government action package to address key issues related to nutrition and food insecurity, which includes a pillar centered around empowering consumers to make and have access to healthy choices—which cites PBFA and our coalition partners in our effort to encourage restaurants to serve plant-based options. In parallel with the White House effort, PBFA, PBFI and Green America’s Soil & Climate Alliance agreed to a number of agricultural commitments including efforts to promote regenerative farming practices, provide opportunities for domestic sourcing, and build diversity and inclusion in the supply network.

By the end of the panel, it was clear that plant-based foods face significant challenges—but if we stand together, there are also unprecedented opportunities to grow our industry and impact society for the better.

“You are your own best lobbyist…never underestimate the power of your own voice.” Bev’s parting words resonated with an audience that left the session hopeful for a bright future for plant-based foods and inspired to join the fight to secure that future.

We can’t wait to work with our members, coalition partners, and the broader movement to uplift the plant-based foods industry and build a healthier, more sustainable, and more equitable food system for all.