Sustainable Innovation: How Fungi-Based Proteins Are Changing the Game 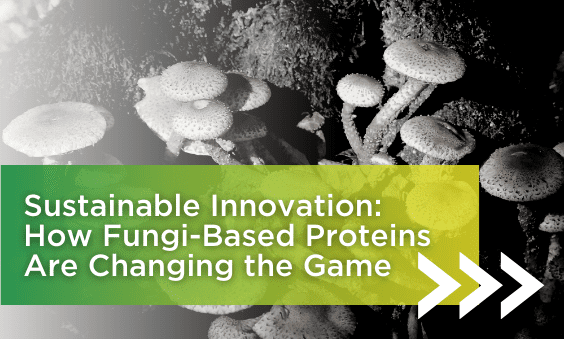 When it comes to developing delicious plant-based foods, mushrooms have long been a favored ingredient amongst consumers, chefs, and food companies for their ability to closely mirror the hearty texture and umami flavor of meat. Often the star of the show in the worlds of plant-based bacon, chicken, beef, and snack foods, fungi-protein is an adaptable canvas on which to create a variety of textures and preparations–one that has the potential to meet ever-evolving consumer tastes.

What is Fungi-Based Protein?

The key to achieving the fibrous, meaty texture of fungi-based proteins lies in a possibly unexpected place: the roots. Mycelium, the mushroom’s vegetative roots, are able to take in sugars from their environment and, through fermentation, transform them into nutrient-rich proteins. Through this innovative process, mycelium can be transformed into a variety of plant-based foods, including PBFA member Quorn’s mycoprotein products and MyForest Foods’ bacon.

In addition to delighting the taste buds, there are also ample benefits for the body: Because fungi-based proteins, while technically not derived from plants but rather created from the fungi present in plant roots, boast an impressive nutrition profile. One study found that Quorn’s mycoprotein is not only high in protein and fiber–and low in fat, cholesterol, sodium, and sugar–but may help maintain healthy blood cholesterol levels, promote muscle synthesis, control glucose, and insulin levels, and increase satiety.

Given that the average American consumes twice the recommended amount of daily protein, and only about five percent of the U.S. population consumes adequate fiber-–increasing the risk of chronic conditions like heart disease, hypertension, type 2 diabetes, and gastrointestinal disorders—innovative fungi-based proteins represent a simple, health-promoting alternative to zero-fiber animal-based proteins.

The Environmental Benefits of Mycoproteins

It is no secret that producing animal-based proteins requires enormous amounts of our finite land and water resources, and has a tremendous impact on our climate: Overall, 30% of global greenhouse gas emissions come from food production and 57% of these emissions are the direct result of raising livestock. As we look for more innovative ways to feed a growing global population, fungi-based proteins offer sustainable and satisfying alternatives to environmentally-damaging animal-based foods.

When it comes to producing delicious, nutrient-rich foods in a way that minimizes impact on the planet, fungi-based proteins set a high bar. Studies have shown that fungi can play a beneficial role in improving soil health and increasing agricultural efficiency, they play a beneficial role in biodiversity and the health of ecosystems and humans alike, and have an enormous potential for creating foods with minimal resource inputs is astounding.

In a recent press release, Eben Bayer, Chief Executive Officer of MyForest Foods, broke down the process: “Replicating Mother Earth’s magic, we simulate the forest inside our vertical farms — cool rains, evening fog, morning mist, and afternoon breezes create just the right environment for our mycelium to grow, weaving into delicate, precise, and tender whole-cuts for the world to enjoy.”

Most impressively, MyForest is able to grow and harvest its protein in just one week. When compared to the time and resources needed to grow and produce animal-based foods, mycelium offers a much smaller impact and quicker turnaround.

PBFA member Quorn is well-known as a pioneer in the fungi-based protein space. Their story dates back to the 1960s when Lord Rank Hovis McDougall set out to find a renewable protein source that could sustain the growing world population. Ultimately, Rank came across Fusarium venenatum, which as the Quorn website explains, converts carbohydrates into protein, producing ‘Quorn’s mycoprotein’: a protein-rich, sustainable food source that is packed with fiber, low in saturated fat, and contains no cholesterol. From just one gram of fungi, Quorn can produce 1,500 tons of mycoprotein in each fermentation cycle.

When it comes to creating healthier, more sustainable, and scalable protein options, companies using fungi-based ingredients are demonstrating the significant benefits for the environment, human health, and animal welfare across categories–and paving the way for more innovation to come. We can’t wait to see what the future holds for these groundbreaking and deliciously versatile proteins!